“Change  creates  unprecedented  opportunity.  But  to  take  full  advantage  of  those  opportunities,   focus  on  the  team.  Teams  win.” – John  Doerr


It's very important to surround yourself with right people. Entrepreneurs lean heavily on “social capital” to build business:
1. Build up a network
2. Identify your strengths and weaknesses

Highly successful entrepreneurs never hesitated to introduce themselves to people who  might prove useful or to leverage well‐developed contacts when they had a specific end in mind. They also tend not to burn the bridge. When you leave a company, make everyone remember you in a good way. You might have to deal with those in the company again in the future.

In fact, it’s more than likely that in the end you’d ask only a small percentage of the people you know for help. But, if you have a sincere affinity for interesting people, that hardly matters. Since the pleasure of getting to know them is an end in itself.

When you ask for help, it’s likely that you will get a “no”. It’s not uncommon to be turned down 100 times before getting a “yes”.

At the founding stage, it usually consists of two or three people: An idea person and a get-things-done person.There're always two persons: Steve Wozniak  and Steve Jobs; Bill Gates and Paul Allen.
Too many people lead to fights among founders. But single founder tends not to be successful either.

Although business plan is important, characteristics of the founders are far more important to venture’s success. The founders need not know or have a lot of skills. They can hire someone to do it for them. But the founders need to be able to inspire and recruit outstanding people, and understand the nature competition and factors required to win.

The founders should have complementary skill, not similar skill. That way, they will help fullfil what the other lacks. And, they will not fight much because of their ego.

Here are a few things which will help you recruit the best people:

“people are drawn  to the excitement of somebody who is really alive, really on fire about something”


It's Your Dream. So Fullfil It!

But remember. This is your own (ad)venture. Everybody else are just partners or helpers. They’ll be looking to you for leadership direction, and inspiration. For better or for worse, you will have to bear the ultimate responsibility.

“It’s your dream, sometimes there’s simply no other choice. You must do it alone.” 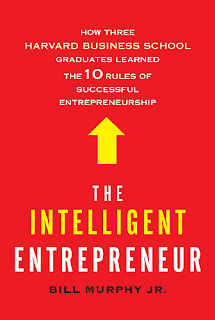 I am leaving out the details of the books. Most books have interesting examples and case studies, not included here. Reading the original book would be much more entertaining and enlightening. If you like the summary, you may want to get the original from the source below.
Posted by Teerawat Issariyakul at 10:37 AM