You may try to raise your voice and intimidate the other side. But be careful. If the other side isn’t intimidated, they might get angry. You may have difficulty in negotiation from that moment on. Also, if you use it a lot, it may damage your reputation.

Tactics 1--The crunch: ‘You’ve gotta do better than that’

Say ‘I offer you a very good price. Why do I have to do better than that?’ The other side will have to stop and find a good answer to your challenge.

“If you nibbling enough, you can make a meal of peanuts.”

Ask for extra stuff before or even after signing the contract. Do it nicely in the way that this thing should be universally given. But you just say it out to verify. For example, after you buy a second-hand car, you may say ‘please clean the car and fill the gas. I will pick up the car tomorrow at 3 pm’.

Sometimes, the other side will move very fast. This could be their nature, or it could be their strategy  not to allow you time to think. You need to control the pace at you advantage. Changing pace can be from days to weeks. The other side may press you to get the answer by tomorrow. They don’t allow you to do the research on the issue, or finding another buyer. You need to slow down the other side.
You may slow the pace down by mixing in other topics. They can be topics that you may or may not wish to win. But make the other side think that you need it. The other side will have to stop and even do some research about these new topics. In the mean time, you have time to ponder the topic that you cannot keep up with earlier. Agin, you don’t expect to win these new topics. Your objective is slow down the pace.
You can confuse the other side by going at different pace or alternating about giving and getting concessions. An example is when you are negotiating for a price of a car. You may start talking about insurance to slow down the discussion about the price. This will give you time to think and come up with a new strategy.

Say something like ‘What causes you to do this? We’re getting along fine, and, all of the sudden, you throw in a new issue. What is your motivation?’ Challenge them. Find out the cause. Are they waiting for a better buyer? Do they have a really reasonable reason to change the pace?

This is a hard ball. It is very hard on people. Most people will just leave it, because they don’t want to be forced to do something.
When using this tactic, try to make your tone softer by using ‘I have another buyer’ and/or aura of legitimacy.
For example, you can say ‘I have the quotation in my office. I’ll show it to you if you want to see it.’ Even if the other side demands to see it, you can say that you cannot locate the paper and you will show it to them later. In the mean time, the other side have to make the decision right away.
You also need to leave a way for the other side to safe face. You may have to reopen the negotiation later.

Change the parameters. If the problem is the price difference, you can ask the other side for something worthing the difference. It can be marketing budget, payment terms, etc.
Even if you are the one who made the ‘Take it or leave it’ statement, you may call the other side about the change of parameters that could make the deal work.

Revise the contract after it is signed. This can be ethical or unethical.


Be careful. Both options would infuriate the other side. They would very likely lead to litigation. 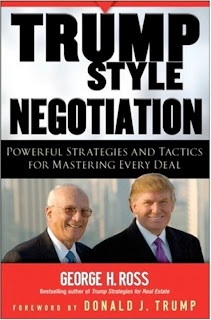 I am leaving out the details of the books. Most books have interesting examples and case studies, not included here. Reading the original book would be much more entertaining and enlightening. If you like the summary, you may want to get the original from the source below.
Posted by Teerawat Issariyakul at 2:01 PM