[Quote] The Science of Fear: Why We Fear the Things We Shouldn’t and Put Ourselves in Greater Danger by Daniel Gardner


“The only thing we have to fear is fear itself." --Franklin Theodore Rosevelt

“The great depression can hurt the United States. But fear could destroy it.”


“For every problem, there is a solution that is  simple, clean, and wrong.” H. L. Naken


“We overestimate the likelihood of being killed by the things that make the evening news and underestimate the those that don’t.”

“Head is a compulsive rationalizer. If it doesn’t have a answer. It makes one up.”


“People love stories about people. We love telling them and we love hearing them.”


“Trust is difficult to build and easily lost.”


“Risk is a major subject within sociology, and culture is the lense to which sociologists peer.”


“High cholesterol is not a disease-- merely a risk factor for a cardiovascular disease.”


“These number may not make a difference, because statistics do not sway gut, and gut often have the final words in people’s judgements.”


“Anecdotes aren’t data, as scientists say, no matter how moving they may be or how they pile up.”


“The media actually pays very little attention to crime. It is crimes they cannot get enough of.”


“But, generally, non-violent crimes loses to violent, and less bloody violence loses to more bloody. Hence, in the media, murder is king.”

“It’s not about safety. It’s about justice.”


“...the fear of cancer, cancerophobia [as he called it], had become a plague in its own right. It is possible that today cancerophobia causes more suffering than cancer itself.”


“People have this impression that if it’s natural, it can’t be harmful, and that’s a bit naive,” -- Bruce Ames


“The right dose differentiates the poison from the remedy.”


“In theory, terrorists could obtain viruses, nukes, and the like from black markets, but these seem to be confined to James Bond movies and newspaper articles trafficking in rumor and speculation. They could also obtain weapons of mass destruction from one of the very few states that have such weapons and would like to see Israel or the United States suffer, but any leader pondering such a move has to consider that if his role in an attack were uncovered, his country would quickly be reduced to rubble.”


“Terrorists are not formidable foes. If they were, they would fight using other means. It is precisely their weakness that leads them to carry out the slaughter of innocents—the one form of attack available to even the feeblest combatant. In itself, such slaughter is unlikely to deliver a serious blow to the enemy. But it does generate fear, and fear can inspire reactions that terrorists hope will advance their cause.”


“The terrorists wouldn’t destroy America; The terror would.”


“Very often, Head and Gut will agree. When that happens, we can be confident in our judgments. But sometimes Head will say one thing, Gut another. Then there’s reason to be cautious. A quick and final judgment isn’t necessary to deal with most of the risks we face today, so when Head and Gut can’t agree, we should hold off. Gather more information. Think some more. And if Head and Gut still don’t match up, swallow hard and go with Head.”


“The past wasn’t perfect, but at least we knew where we stood. Now when we look into the future, all we see is a black void of uncertainty in which so many ways things could go horribly wrong. This world we live in really is a more dangerous place.”

“The past always appears more certain than it was, and that makes the future feel more uncertain—and therefore frightening—than ever”


“We are safer than ever before. We worry far too much about very small risks like carcinogens in food, the risk of train accidents and things like that. We are unduly risk averse and public policy is very risk averse for those minor matters.”--Martin Rees 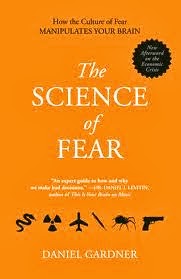 I am leaving out the details of the books. Most books have interesting examples and case studies, not included here. Reading the original book would be much more entertaining and enlightening. If you like the summary, you may want to get the original from the source below.
Posted by Teerawat Issariyakul at 3:29 PM